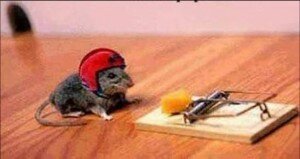 “I always thought there was a big leap for making enough money on your own and it turned out it wasn’t really as hard as I thought. [We all] have a fear-based reaction to what’s going on [when striking out on our own]. The number one thing is the idea of risk. Hundreds of people have said to me that going out on their own is too risky.” — David Meerman Scott in our interview (part 1 and part 2).

John Lee Dumas talked about the fear of going out on his own as impostor syndrome, and how his mentor got him over it.

“I think staying in the corporate world is much more risky because you don’t have multiple revenue streams. [Having multiple revenue streams] spreads your risk much like an investment portfolio. That’s much less risky than if your entire revenue is based on one job or the whims of one boss. You can go from 100% revenue to 0% in one second. I might go up and down but I have other sources to make up the difference. Even now, I can make up domestic speaking engagements with international speaking [which adds international diversification when domestic speaking slows down].”

Talking about entrepreneurship like a collection of revenue streams make it sound more like a life investment strategy. Any investment advisor will tell you to diversify your holdings, and any insurance agent will tell you to mitigate your risk exposure. What David is really talking about is entrepreneurship as a life and career strategy. It can be daunting to keep a number of paying projects in the air at the same time. That’s why we often talk about success habits that help our guests (and will help you) be more efficient and successful. No wonder David thinks “getting fired was a gift.”

Getting fired from my corporate job was a gift