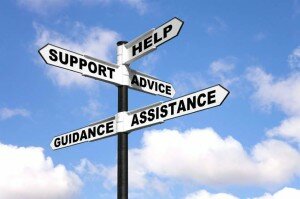 We picked up this tip while interviewing John Lee Dumas, who told us all about how his mentor relationship helped him get over his biggest fears and to just get started leading with value and listening to his audience on the way to impressive profits.

In our Episode 1, John talks about “impostor syndrome,” which he personally learned about from Seth Godin. It’s a well-documented feeling that manifests as negative self-talk in men and women. You can read more about it in Valerie Young’s book, The Secret Thoughts of Successful Women: Why Capable People Suffer from the Impostor Syndrome and How to Thrive in Spite of It.

John tells us in the interview, “What held me back was the impostor syndrome: The little voice on my shoulder that said I couldn’t do it.” His negative thoughts and emotion kept making him push back his launch date, all the way from August 15th to October 1st. He tells us it was “all out of fear.”

How did he break through this fear? John tells us, “Breaking through goes back to the most powerful thing is any entrepreneur can do — get a mentor: someone you can talk to about your business and your fears.”

John formed a mentor relationship with Jaime Tardy, author of The Eventual Millionaire. As John relays her dealing with his delays, she said, “You will launch today or I will fire you.” He says that’s what allowed him to get over the impostor syndrome and launch. Delaying his launch ended up having one major impact. “All that did was delay my success by the same number of days. That six figure month [that happened in October 2013] would have come a full month earlier. I put myself back by waiting.”

Key Advice: Get a mentor, invest in yourself and embrace the impostor syndrome. Drive forward and listen to the advice of the people who have come before you.

6 Tips On Pitching Your Startup Idea To Angel Investors

Listen to your Audience